UPDATE 7-16-14: An additional section has been added near the end covering the Islamic Crescents’ Observation Project visibility map.

As the reported sighting came in from Yemen on Friday June 27, 2014, one of my friends remarked, “that Yemeni must have been high.” I laughed, not only because Yemenis are known to chew a semi-intoxicating substance called ‘khat’, but because I had seen four different [amateur] astronomers produce visibility calculation maps, such as the two below, and all of them were clear that it was impossible to sight the moon in that part of the world. 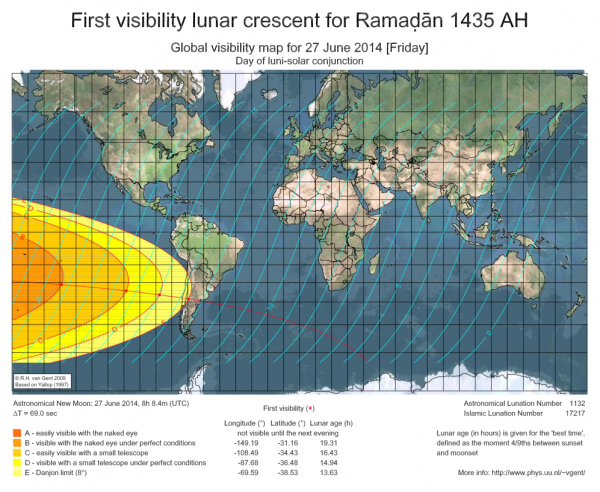 Several hours later, I managed to tap in to a live-feed of a long and heated discussion taking place among the Assembly of Muslim Jurists of America [AMJA]. They were deciding whether or not to reject the Yemeni sightings based on astronomical visibility calculations claiming it impossible to sight the moon there. As the discussion drew to a close, news came in that the crescent was sighted in Houston by three people and another one in Alabama. Initially I wondered if they were chewing some of that Yemeni ‘khat’ as well. To my surprise, within a matter of minutes, AMJA made the call to confirm both the Yemeni and American sightings.

I immediately phoned Dr. Ahmad Salama, a consultant for NASA/JPL and professor of astronomy. I made him put his dinner on hold and we began to calculate. “How far is the red zone [where the moon could be sighted by optical aid only] from Houston? How many degrees away? When was sunset? When was moonset in Houston?” After a series of questions from him, I put my own question on the table, “What level of inaccuracy is there in these calculation maps? Give me a percentage Dr. Ahmad: 1%, 5%, 10%, 20%, or zero?” He responded, “Anywhere not too far from the red area on the map is a huge gray area, scientifically speaking. Under perfect conditions, it is unlikely, but not impossible, to see.”

Nonetheless, many prominent scholars rejected these reports outright based on the colorful visibility maps they had seen, even those living in the Houston area. I didn’t know what to think and chose to defer to the senior scholars. “Let them take the burden on themselves”, I said internally.

Later that night, two more reports came in, one from Tucson and another from San Diego. They were also rejected by the same scholars for the same reasons: those locations are not within the visibility zones on the maps. I know for a fact that people do make mistakes in seeing the crescent [even if they aren’t high], but what if one of these sightings happened to be in the gray area that Dr. Ahmad was alluding to and the calculations used to make these maps were off? I decided to investigate.

I phoned the brother who claimed to see the moon in San Diego. Abu Isa Mateen Khan, 39, is well known to the Muslim community in San Diego. He even happens to live next door to Shaykh AbdelJalil Mezgouri, the Imam of the Islamic Center of San Diego. Mateen was a very friendly brother and sounded very sincere and helpful. Here is his story:

“I went with my wife and kids to go sight the crescent, even though we doubted we would see it and didn’t even buy groceries for breakfast the next morning. We headed for the San Diego State University Observatory on Mount Laguna to see if we would be able to spot the moon there. We were two groups, but we both got lost on the way. Time was ticking, so about a few miles after we passed the 4000ft above sea level mark, we decided to pull over at a viewpoint at 8:02PM. My wife was taking notes. We knew which direction to look because we had been told by some people who know what to do. We glanced in the direction near where the sun was setting and saw something. We thought it might be a jet-stream so we initially ignored it, but it kept coming back in view. I used my son’s toy binoculars and we could clearly see that it looked like the crescent. I couldn’t see it that well without the binoculars but my wife and kids saw it clearly. We observed it from 8:03-8:11PM [with a one minute margin for error]. While observing it, it was very clear and kept moving down a few centimeters. It disappeared at about 8:11 or 8:12. I pulled out my phone and checked the GPS location which showed about 290 degrees northwest. If you were looking at a clock, the illuminated parts were from 4 o’clock to 5:30. I took a picture with my phone but it has a poor quality camera so the moon cannot be seen in the picture. As we were about to leave, we noticed a person not far from us with a telescope. He was not a Muslim but we decided to talk to him. We asked if he saw that thing in the sky and he responded, ‘You mean the moon?’ I responded, ‘Was that the moon?’ He answered in the affirmative and told us that he is an enthusiast who comes up the mountain every few days to stargaze and take pictures. According to him he was sure that was the moon and saw it clearly himself, although he noted that it is very rare to be able to see it on this day because the colors of the San Diego sunsets cause some parts of the moon to fade out. This motivated me to report my sighting to some of the scholars in the area.”

Despite Mateen’s detailed story, many still rejected his sighting because San Diego does not fall on the visibility maps that have been produced. I called Dr. Salama again, giving him all of the details of the sighting he asked for: degrees the moon was from the sun, the horizon to the crescent elevation, etc. After a few days he phoned me back telling me that in his expert opinion as an astronomer, this sighting cannot be rejected based on the elevation of the viewer, sunset and moonset timing, etc.

So I decided to put the question straight to him, “What’s the point of these maps if they are not accurate?!” His answer was very enlightening. I will paraphrase the main points here:

These maps are not deterministic in nature but should be used as a guide to know where the moon can ‘usually’ be sighted. The only thing that is deterministic is the position of the moon relative to the sun, the earth, etc. These maps are calculated based on sighting reports from amateur astronomers who reported whether or not they saw the moon on certain days. However, there are three issues. One, those sightings [or lack thereof] were viewed under certain physical conditions which will be different based on the condition of the sky and atmosphere on another future date. Two, the sightings are not taken from observatories or expert astronomers but rather amateur enthusiasts. Three, the number of observations is limited. If the data points were doubled or tripled, it is probable that the visibility curves would change drastically. In conclusion, the early visibility of the moon has always been a problem due to how the Earth’s atmosphere distorts light and due to other environmental factors. Even the U.S. Naval Observatory is on record to admit that there is a large ‘gray area’ when it comes to commenting on the visibility of the moon in any given place at any given time.[2]

Another interesting find was a new map which adds a zone of impossibility. Strangely, there are two wordings: ‘not possible’ and ‘impossible’. The red zone [i.e. ‘impossible’] is defined as being: “impossible to see the crescent from the areas located under the red color because either the moon on this day sets before sunset and/or the topocentric conjunction occurs after sunset”. A quick glance reveals that neither Yemen nor the USA were in the red zone. This type of red zone, I assume, would be labeled a ‘deterministic’ calculation and thus result in some level of actual certainty. However, anything within what may be termed the ‘gray area’ will remain exactly that: a gray area.

Will knowing this unify the Muslim community about the start and end of Ramadan? Absolutely not, because there are many more variables involved. Nonetheless, this is a call for people to stop making inaccurate comments alleging that visibility calculations concerning the moon are ‘certain’ and ‘100% accurate’, as is commonly done. Whether or not Brother Mateen, or anyone else, really saw the moon on June 27, 2014 cannot be confirmed with certainty, but it would be unjust of anyone to say he was deluded or high at the time.

[1] Notice the major differences between the two maps.

Politician who said ‘the Quran is poison’ converts to Islam

Is the 15th of Shaʿbān Special?